Welcome Back!  I hope everyone had a great Holiday!  More about Stained Glass & some history:

Travel & Tourism One of the things you might want to see when you visit Panama is the famous golden altar of the Church of San Jose in Casco Viejo. The Inglesia de San Jose (the Church of San Jose) is a small almost nondescript building on a narrow street in the San Felipe district of Panama City. Inside is the famous Golden Altar, which is made of carved wood and is covered in gold flake. Commonly known in Spanish as the "Altar de Oro" (Golden Altar), it was originally in a church in "Old Panama." When English pirate Henry Morgan attacked the city the jesuits painted the altar black to hide the gold. The pirates left it alone, thinking it was worthless. After Morgan sacked and burned "Old Panama" the Jesuit monks of the Order of St. Agustine moved the altar to the new church and its present location. 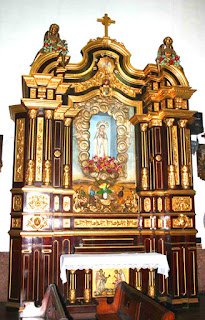 The church is filled with beautiful side altars, also hand-carved wood and enhanced with gold flake. 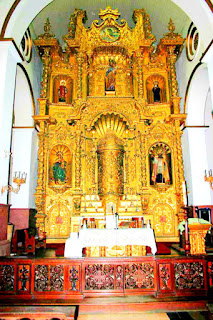 "The Church of San Jose" Initially constructed between 1671 and 1677, was remodeled in the 19th Centrury, is custodian of the Golden Altar, built in the 18th Century. Rotary Club, Panama"
And here's what you came to see. This church gets quite a bit of tourist traffic, and they are kind of accustomed to it. But you should tread lightly and show proper respect if there is a mass being celebrated when you happen to drop in. It's fine to take pictures of the altar, but not during a church service. Some blundering tourists pull some irritating moves in this place. As long as you understand that this is a functioning church and more than just a tourist attraction and show a little respect, then you'll have no problems at all. And, you'll find that people are very proud of the church and like to show it off. 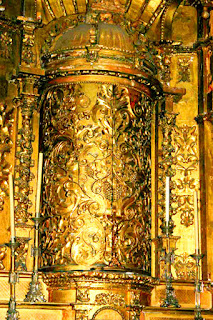 A detail shot of the Golden Altar of the Church of San Jose in Casco Viejo, Panama City. The altar is actually made out of hand-carved wood, and then covered in gold flake. 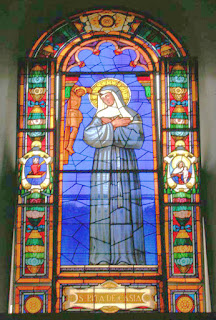 The church also has some very nice stained glass windows, this one dedicated to Saint Rita of Cascia, the Patron Saint of Lost Causes.  Very interesting!! 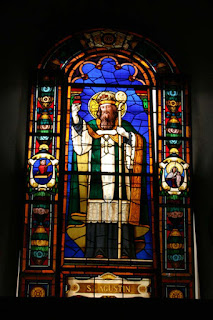 And this one to Saint Augustine of Hippo...

This does not have as many Stained Glass windows to shhow, but the few that are in the church are worthy of mentioning!

That's al for now!  May sunshine fill your day!
Happy New Year to all of you.
Posted by StainedGlassPanelsPlus.com at 2:00 PM No comments:

Hello everyone!  Welcome back!

More wonderful Stained Glass for our history and viewing pleasure: 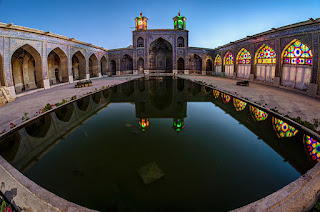 The Nasir al-Mulk Mosque (Persian: Masjed-i Nasir al-Mulk), also known as the Pink Mosque, is a traditional mosque in Shiraz, Iran. It is located in Gawd-i Arabān quarter, near Shāh Chérāgh Mosque.


The exterior of the Nasir al-Mulk Mosque in Shiraz, Iran, while decorative, hints only vaguely at the colorful splendor held within. When you step inside, especially if it’s early in the morning, the mosque truly becomes a vivid and glorious kaleidoscope. 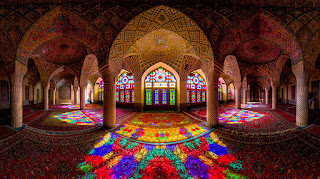 The mosque includes extensive colored glass in its facade, and displays other traditional elements such as the Panj Kāse("five concaved") design. It is named in popular culture as the Pink Mosque, due to the usage of considerable pink color tiles for its interior design.**
The Nasir al-Mulk Mosque is heavily decorated with stained glass – something very rare in mosque architecture. It was built during the Qājār era by the order of Mirza Hasan Ali Nasir al Molk in 1888. The mosque is famous for its extensive usage of stained glass and the divine feast of colours that it casts with the help of the morning sun. The mosque is often referred to as the “Pink Mosque” due to the dominance of this colour in the intricate and colorful tiles decorating its arches and niches.

The mosque was built during the Qajar era, and is still in use under protection by Endowment Foundation of Nasir ol Molk. It was built from 1876 to 1888, by the order of Mirzā Hasan Ali (Nasir ol Molk), a Qajar ruler. The designers were Mohammad Hasan-e-Memār, an Iranian architect, and Mohammad Rezā Kāshi-Sāz-e-Širāzi.  Restoration, protection, and maintenance of this monument is being continued by the Endowment Foundation of Nasir ol Molk. Colorful windows and doors handcrafted by carpenter master 'Hajj Mirza Ayat'** 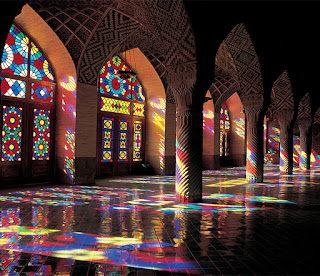 If you ever have a chance, go visit this majestic, one-of-a-kind mosque and don’t miss the chance,  you won’t regret it! 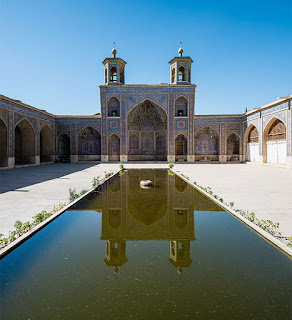 
That's all for now!!  May sunshine fill your day!  Visit often for more great stained glass!!
Posted by StainedGlassPanelsPlus.com at 9:32 AM No comments:

Hello and Welcome back! Some good history to see and read!


The site has been used for religious buildings since at least the 4th century, when an oratory stood on the site. A cathedral was built in the 9th century, but was badly damaged by Norman invasions and was replaced in the 10th century, from about 940, when bishop Milo built a Romanesque cathedral. This building was the location of the Council of Troyes that opened on 13 January 1128/29, at which the Order of the Knights Templar was confirmed and its rule established. The Romanesque cathedral was destroyed by fire in 1188.
Construction of the present Gothic cathedral was ordered in about 1200 by bishop Garnier de Traînel and begun under bishop Hervé in 1208. Work continued until the 17th century. The cathedral only has one tower, St. Peter's; St. Paul's tower to the south was never built, and the building is thus still in fact unfinished. A steeple, with a height of 110 metres, once stood over the crossing: it was ruined by a tornado in 1365, and struck by lightning in 1700, after which it was not rebuilt. 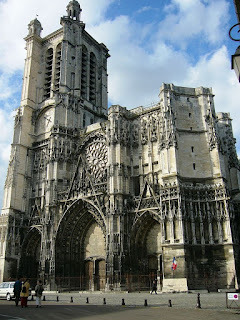 The cathedral structure has suffered other natural disasters: part of the choir was destroyed in a hurricane in 1228, and the roof was set afire by lightning in 1389.
The earliest part is the 13th century choir. The elaborate façade dates from the beginning of the 16th century. The three main portals are the work of the architect Martin Chambiges. The cathedral escaped destruction during the French Revolution, but was de-Christianised and turned into a Temple of Abundance for several years.
It is particularly noted for its exceptional stained-glass windows of dates from the 13th to the 19th century, with a surface area of 1,500 m, and for the magnificent treasure containing among many other important works the reliquary casket or shrine of Saint Bernard de Clairvaux and his closest friend Saint Malachy of Ireland. 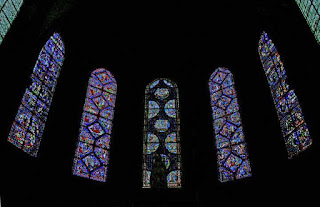 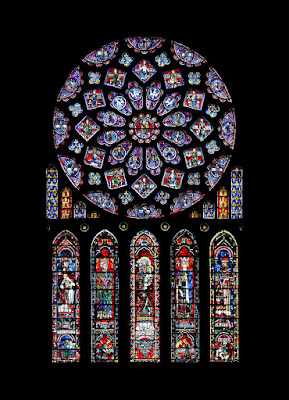 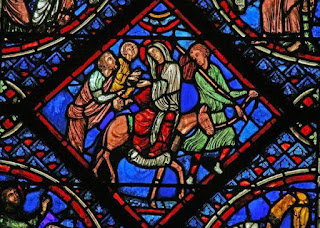 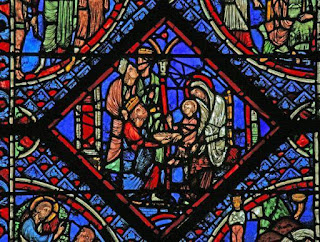 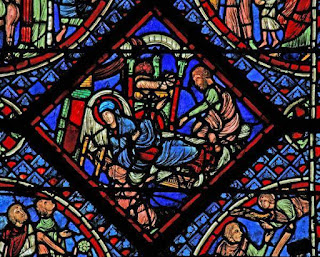 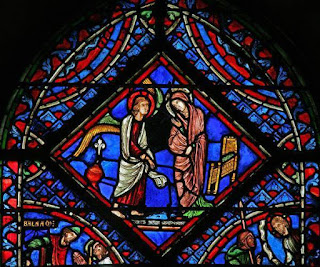 The Stained glass above shows much of the birth of Jesus.

In May 1420, the Treaty of Troyes was signed in the cathedral between Henry V of England, his ally Philip of Burgundy and Queen Isabel, wife of the mad Charles VI of France whereby the throne of France would pass to Henry on the death of Charles rather than to Charles' son the Dauphin. Henry married Catherine of Valois, the French king's daughter, shortly afterwards in Troyes, either at the cathedral or the church of St Jean.
In July 1429, Joan of Arc escorted the Dauphin to mass in the cathedral en route to proclaiming him Charles VII of France at Reims cathedral, in contravention of the recently signed Treaty of Troyes.

Posted by StainedGlassPanelsPlus.com at 5:48 PM No comments: