Sainte-Chapelle is an extraordinary House of worship with many historical facts such as the Sainte Chapelle could be considered a huge reliquary only built to house the relics of the Crucifixion.

In 1239, Saint Louis bought the crown of thorns from Venetian merchants for 135,000 Pounds! (the relics of the crucifixion)

This is just one interesting fact of many which surround the Sainte-Chapelle, but, this blog concentrates mostly on the churches Stained Glass., which is VERY IMPRESSIVE!! 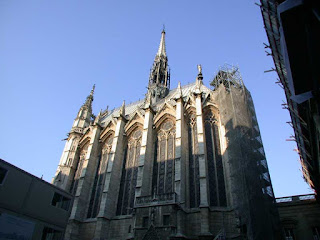 The church, which has two levels, was consecrated on April 26th, 1248, so it is assumed that Sainte Chapelle was finished at this time. The starting date, however, is still unknown, as is the name of the master mason is also (probably Pierre de Montreuil or Jean de Chelles). 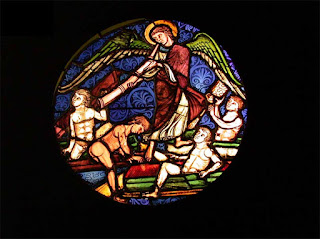 Sainte Chapelle suffered from several fires (1630, 1777) and one flood. Nor did the French Revolution spare it: the outside ornamentation was damaged, especially the spire, whose fleurs-de-lis were considered a symbol of the French monarchy. Then, during the First Empire, the upper chapel was used as an archive warehouse, which led to severe damage and the stained glass windows were dismantled.

The upper chapel has four bays and a seven section choir. Its walls are much taller than those of the lower chapel. They are in great part covered only by stained glasses.The surface of the masonry is reduced to the strict minimum. The thinness of the columns between the stained glass windows is an example of an absolute mastery of gothic art. For strengthening purposes, the columns are reinforced with tie beams.The 15 stained glasses windows (15.4 m height and 4.25 m width) are also considered as master pieces of the art of stained glass. Most of them date from the 13th century. They are composed with 1113 little pieces of glass. 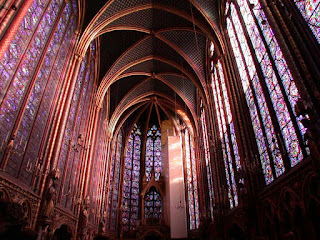 Each pane is represented as: 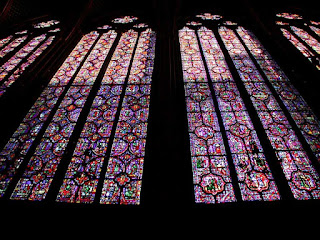 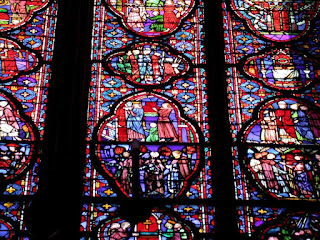 Saint Louis held the relics and considered himself as a worthy heir to the Kings of Israel. This clear link is emphasized by one above, which shows the history of some the most famous Kings of Israel (from Saul to Solomon). Window 1

The Sainte Chapelle is thus a demonstration of the power of King Saint Louis. In window 2, the writings are not in Latin, but in French, which shows Saint Louis's will of domination over the Church.

All the windows tell stories especially to the ones who could not read.....the showed the history pane by pane. 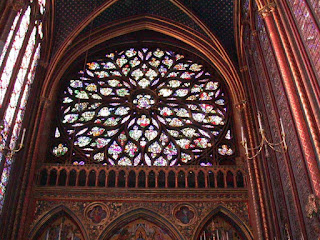 Among the stained glass, the 16th century rose is noteworthy. Its style is flamboyant gothic. Some of its colors (especially the green) can't be found in the other 13th century stained glasses because it was not technically possible to obtain it. The rose shows the Apocalypse around an enthroned Christ in the central oculus.

Further to the religious meaning, some windows are politically significant. This is the case for windows in the upper part of the Chapelle in the Nave. The windows show the history of the Holy Relics, from the discovery of the Holy Cross by Saint Helen, to the transfer to the French Kingdom by Saint Louis.

That's all for today!!  May Sunshine fill your day, stay tuned & check in often for more stained class information!!
Posted by StainedGlassPanelsPlus.com at 3:30 PM