The Sultan Ahmed Mosque or Sultan Ahmet Mosque (Turkish: Sultan Ahmet Camii) is a historic Mosque located in Istanbul, Turkey. A popular tourist site, the Sultan Ahmed Mosque continues to function as a mosque today; men still kneel in prayer on the mosque's lush red carpet after the call to prayer. The Blue Mosque, as it is popularly known, was constructed between 1609 and 1616 during the rule of Ahmed I. Its Külliye contains Ahmed's tomb, a Madrasah, and a hospice. Hand-painted blue tiles adorn the mosque’s interior walls, and at night the mosque is bathed in blue as lights frame the mosque’s five main domes, six minarets, and eight secondary domes. It sits next to the Hagia Sophia, another popular tourist site.  (cited from From Wikipedia) 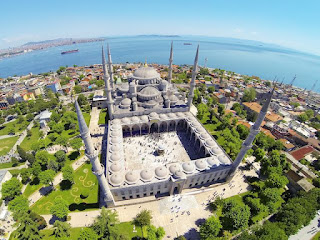 After the Peace of Zsitvatorok (which ended the Fifteen Years’ War between the Ottoman Empire and the Habsburg Monarchy) and the empire’s loss in the 1603-1618 war with Persia, Sultan Ahmed I was looking for ways to boost morale. The Sultan Ahmet Mosque, built between 1609 and 1616, was meant to reassert Ottoman power even though Ahmed I had to procure funds from the treasury since his lack in victory also meant a lack in spoils of war.


So why is Sultan Ahmet Mosque also called the Blue Mosque? Because its interior is lined with more than 20,000 handmade İznik tiles, a ceramic that is always turquoise in color with red tulip designs. The mosque’s upper levels are also painted blue with natural light flooding in from the more than 200 stained glass windows. 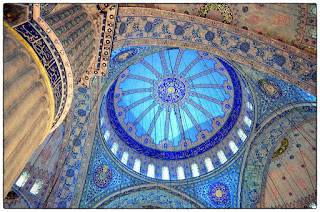 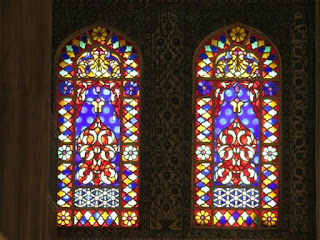 Just a sampling of the beauty within the Mosque!

May Sunshine fill your Day
Posted by StainedGlassPanelsPlus.com at 7:14 PM